At 1:53 in the video above, the air release can be detected, signalling the
beginning of a train entering an emergency application.

At 13:50 in the video above, the air release can again be detected signalling the train entering an emergency application. 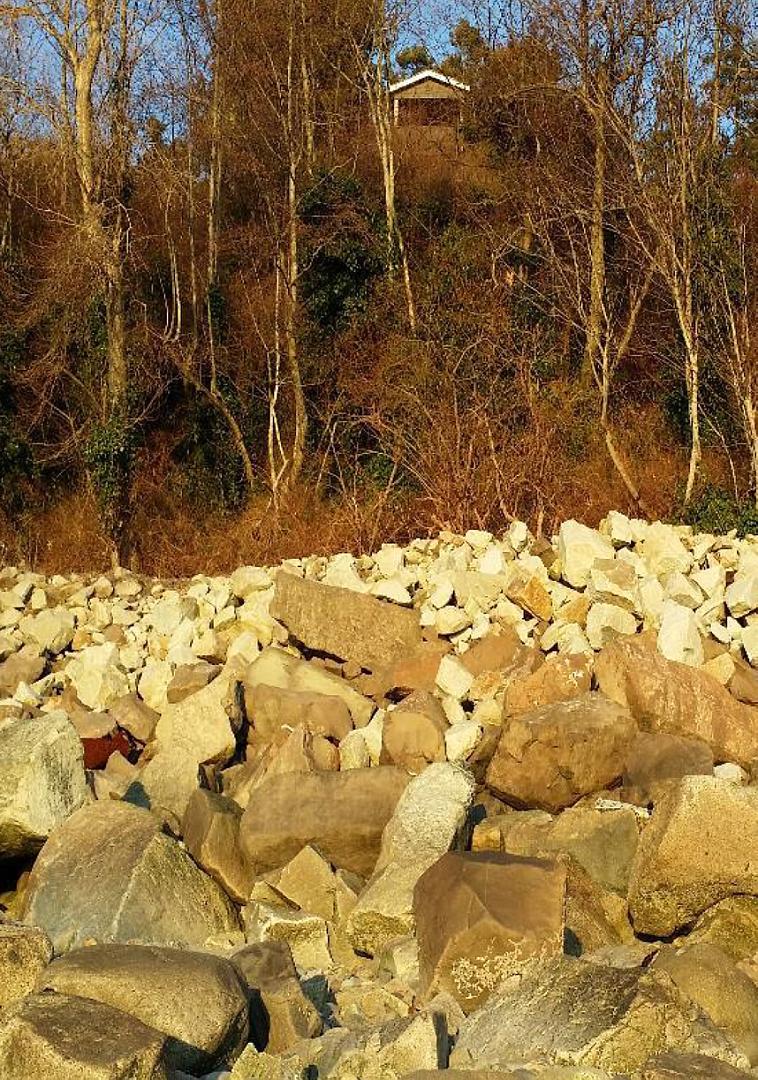 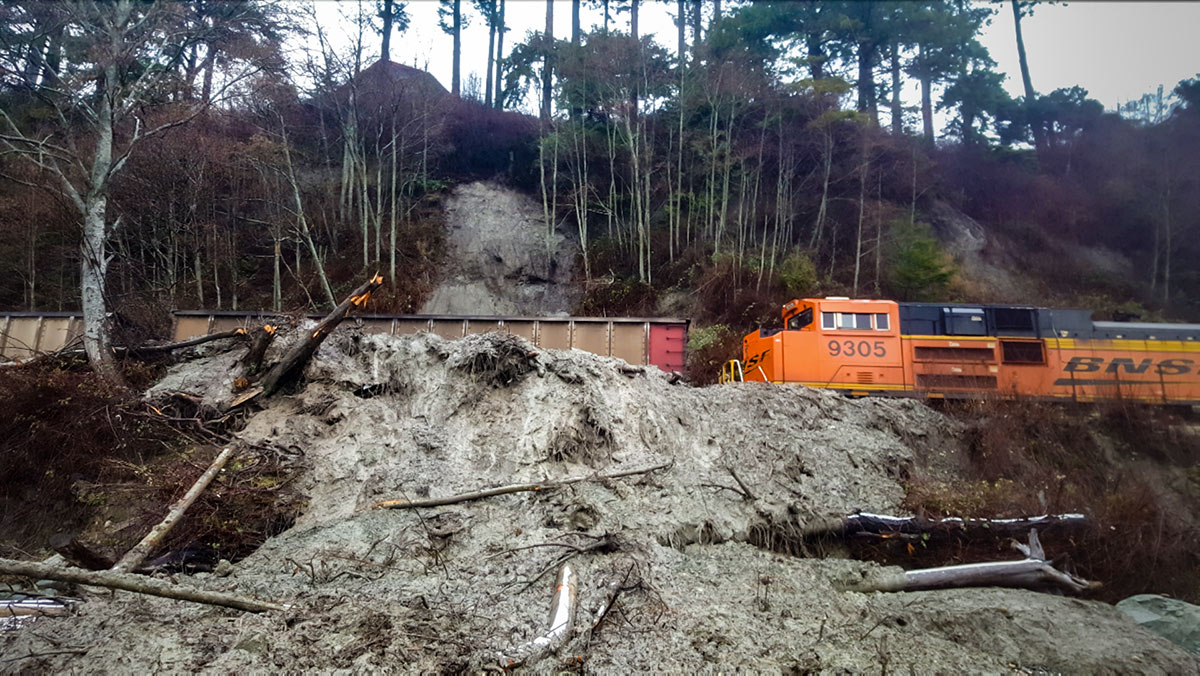 2020 Jan BNSF cleaning up 2nd of two slides at 24 Ave curve, making a total of 5 slides that day along this rail stretch 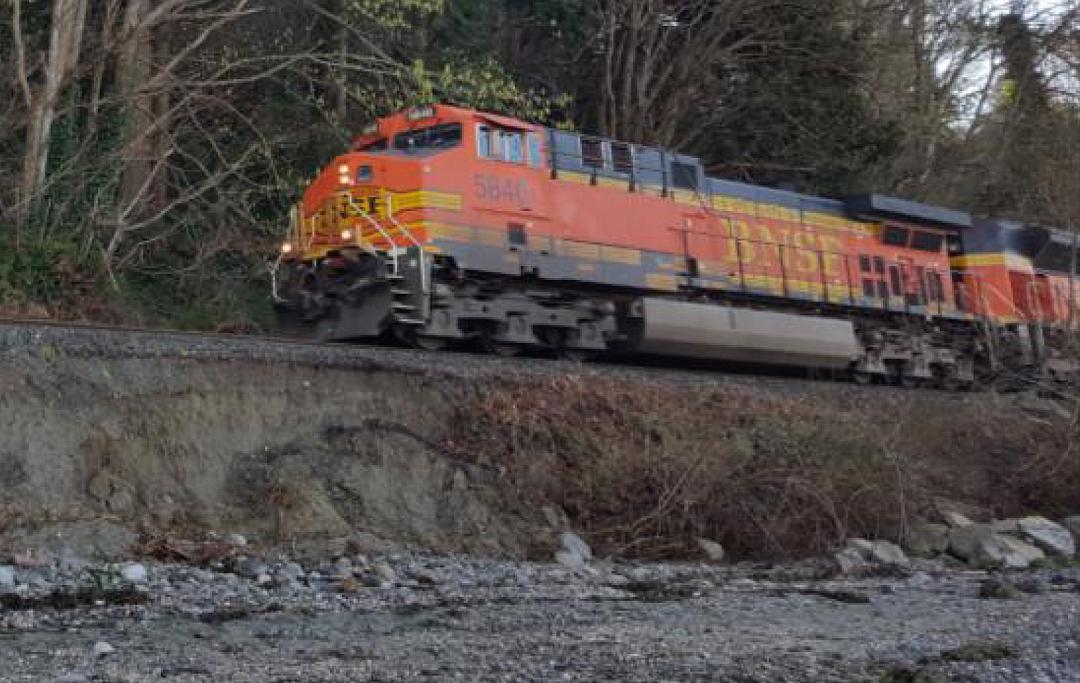 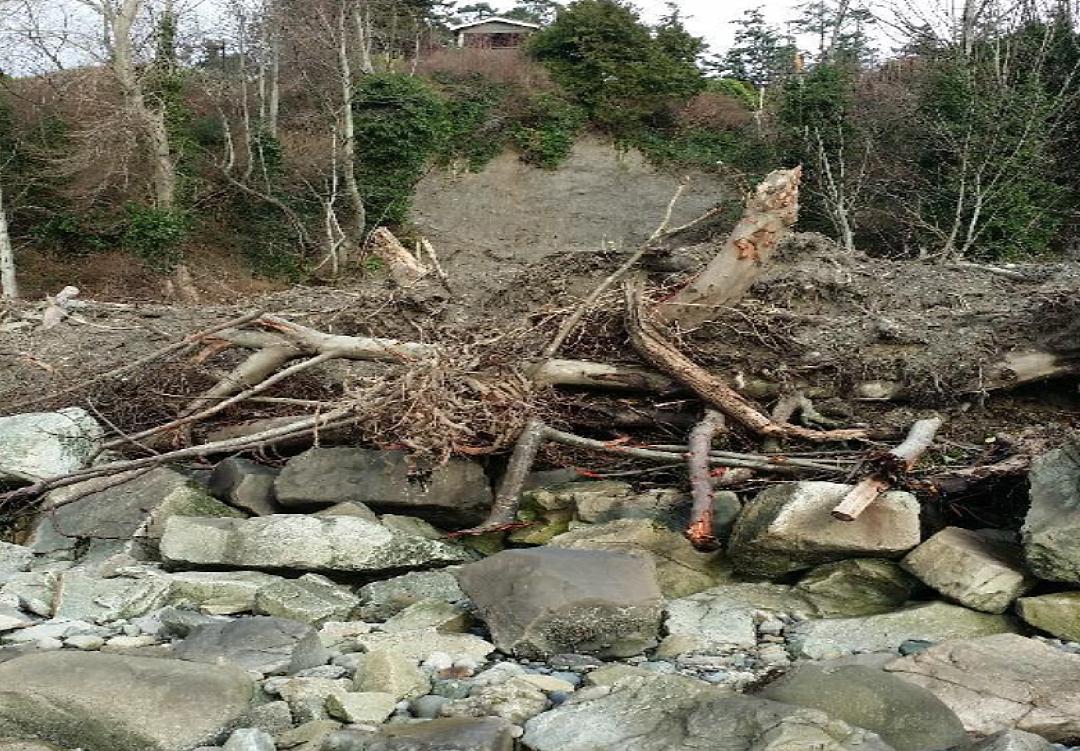 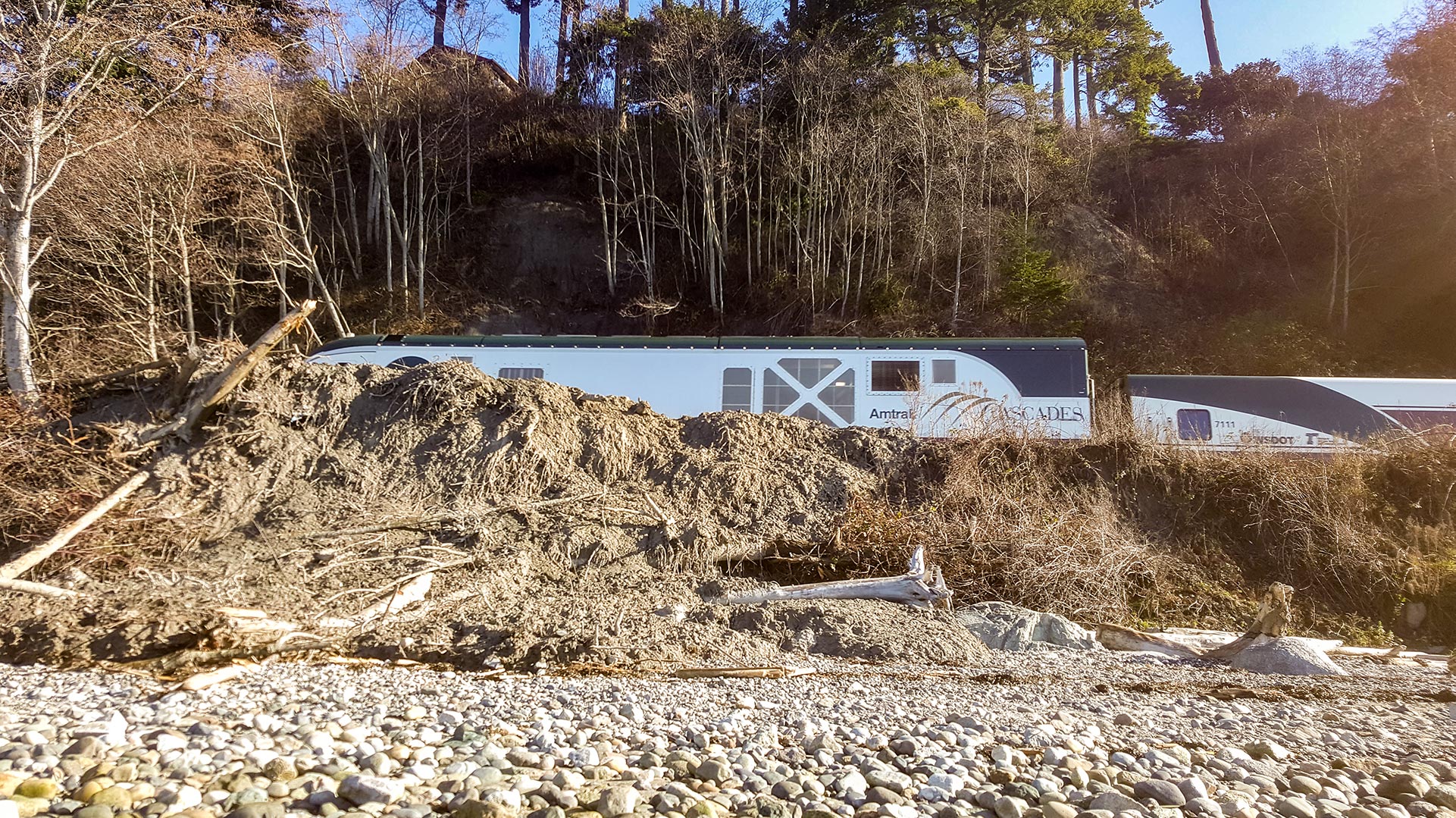 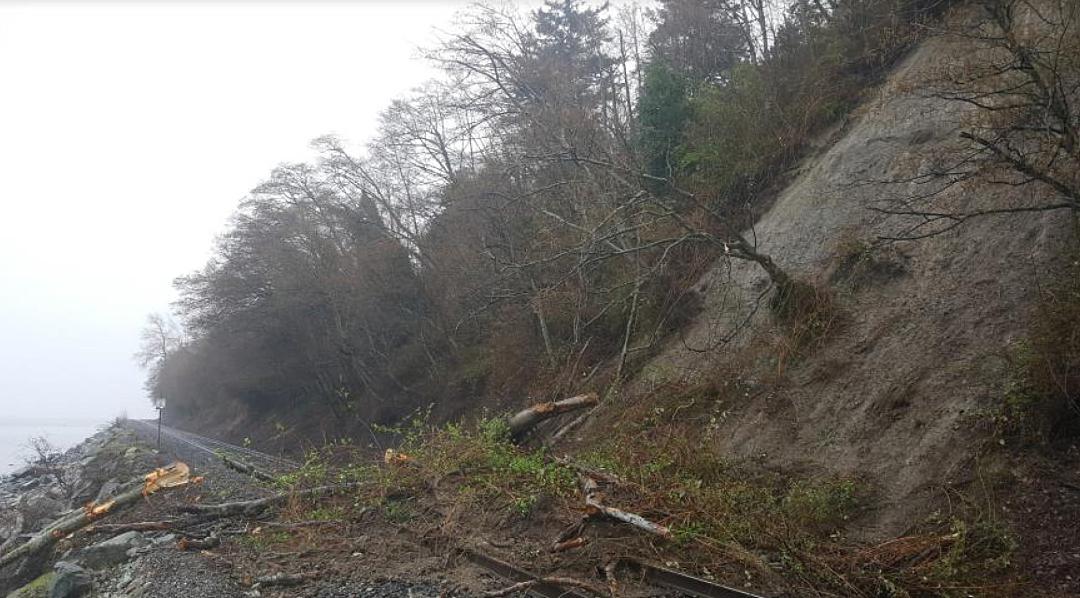 2017 March – Soil slope slide above and over rail line 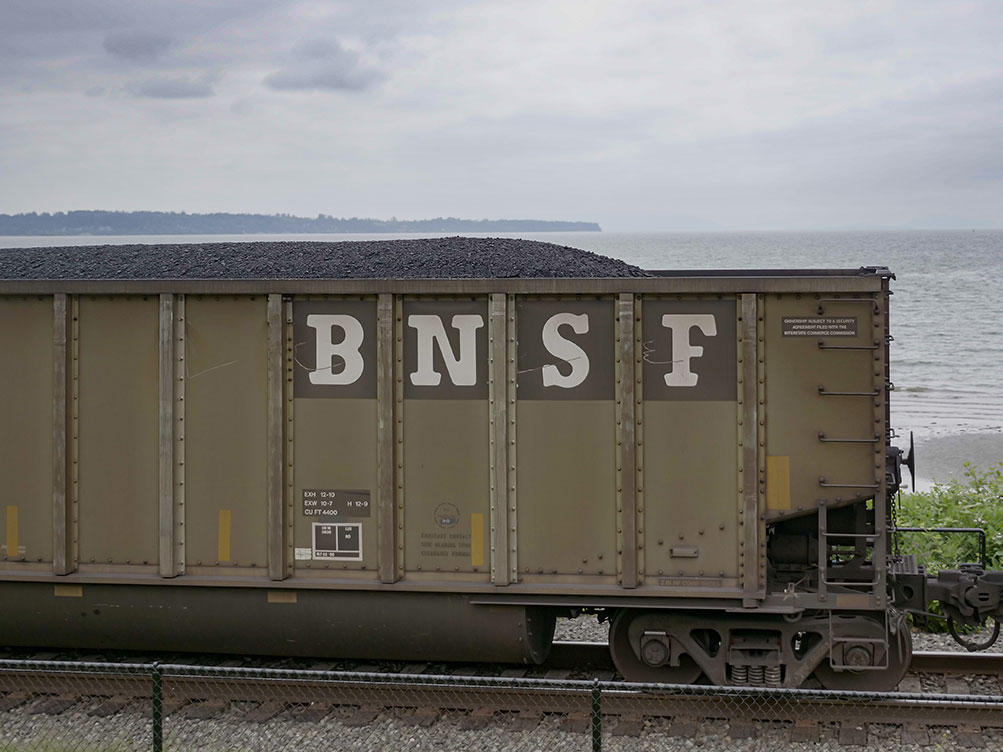 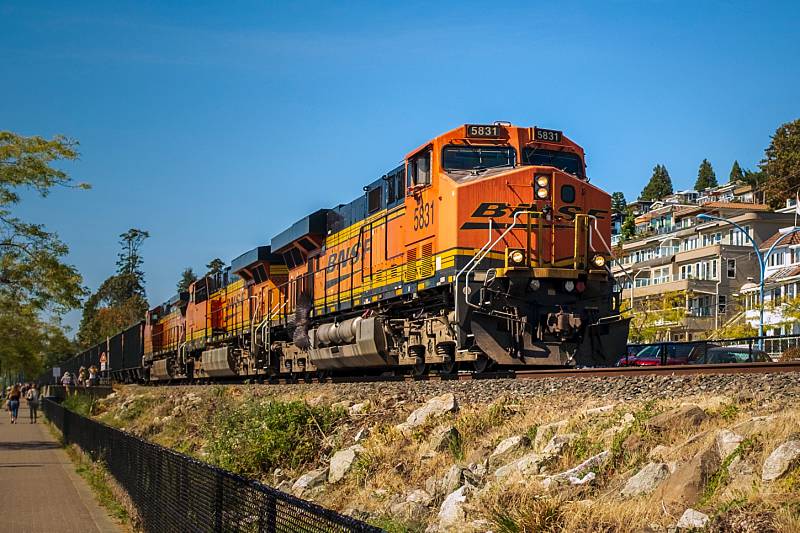 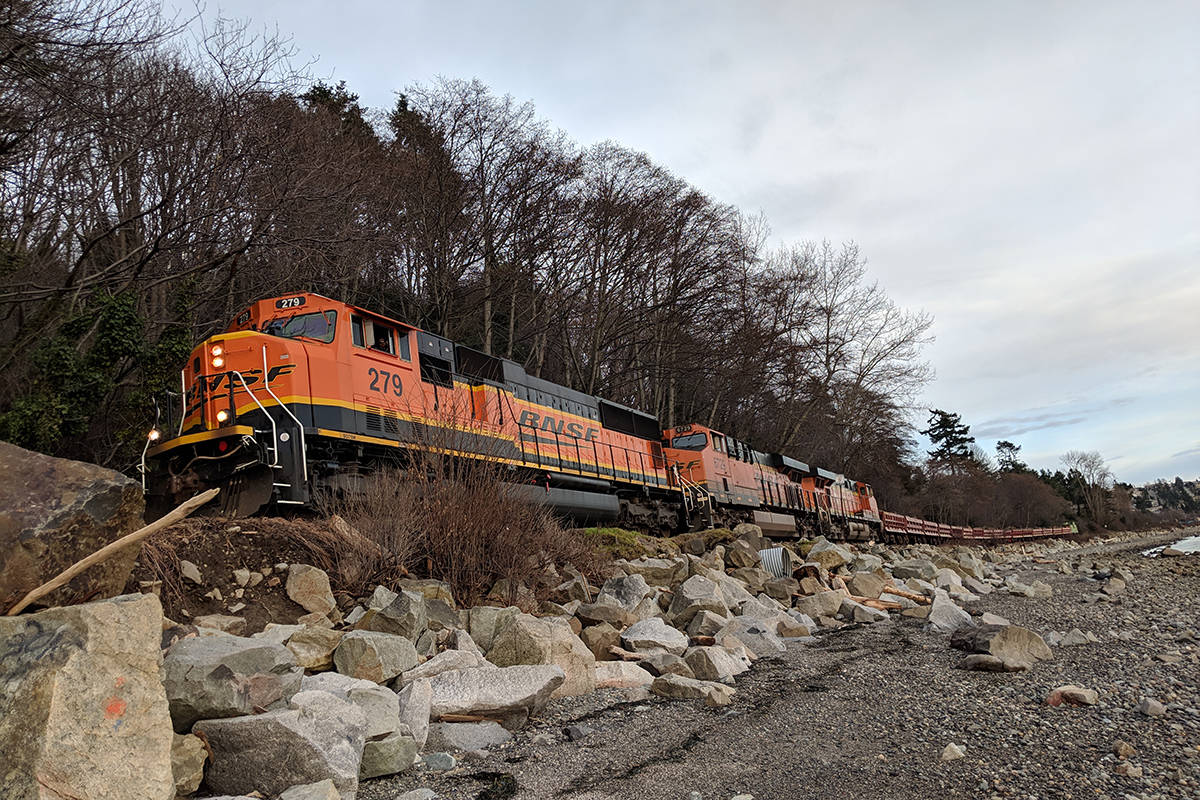 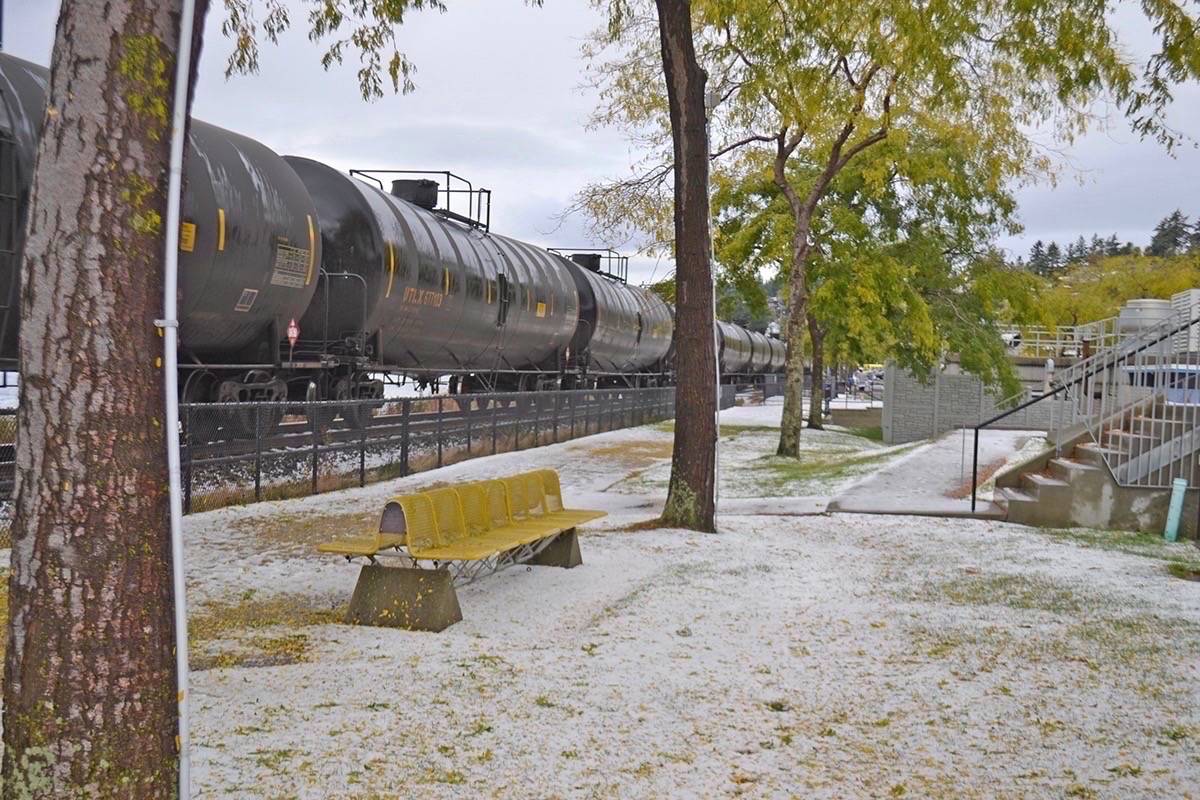 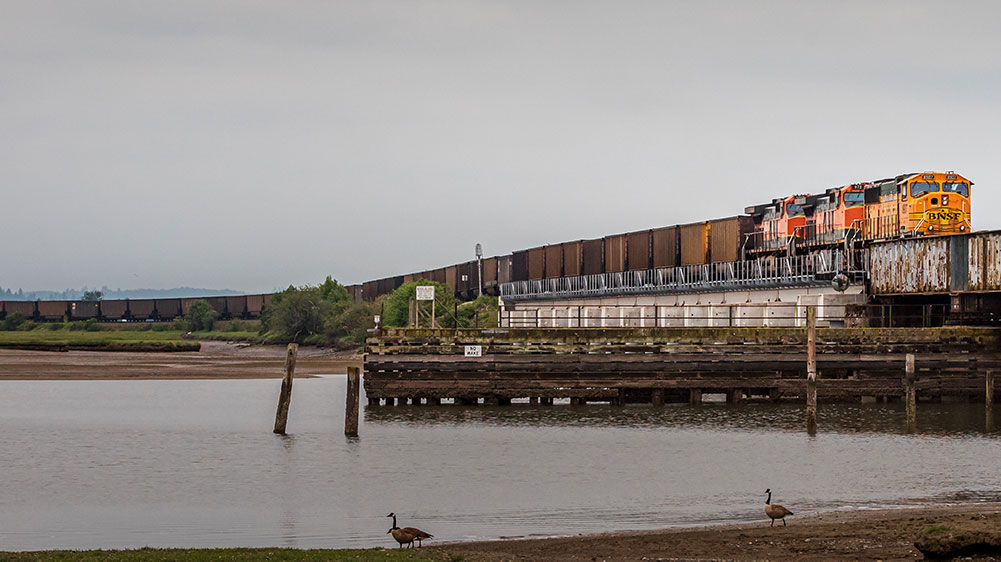 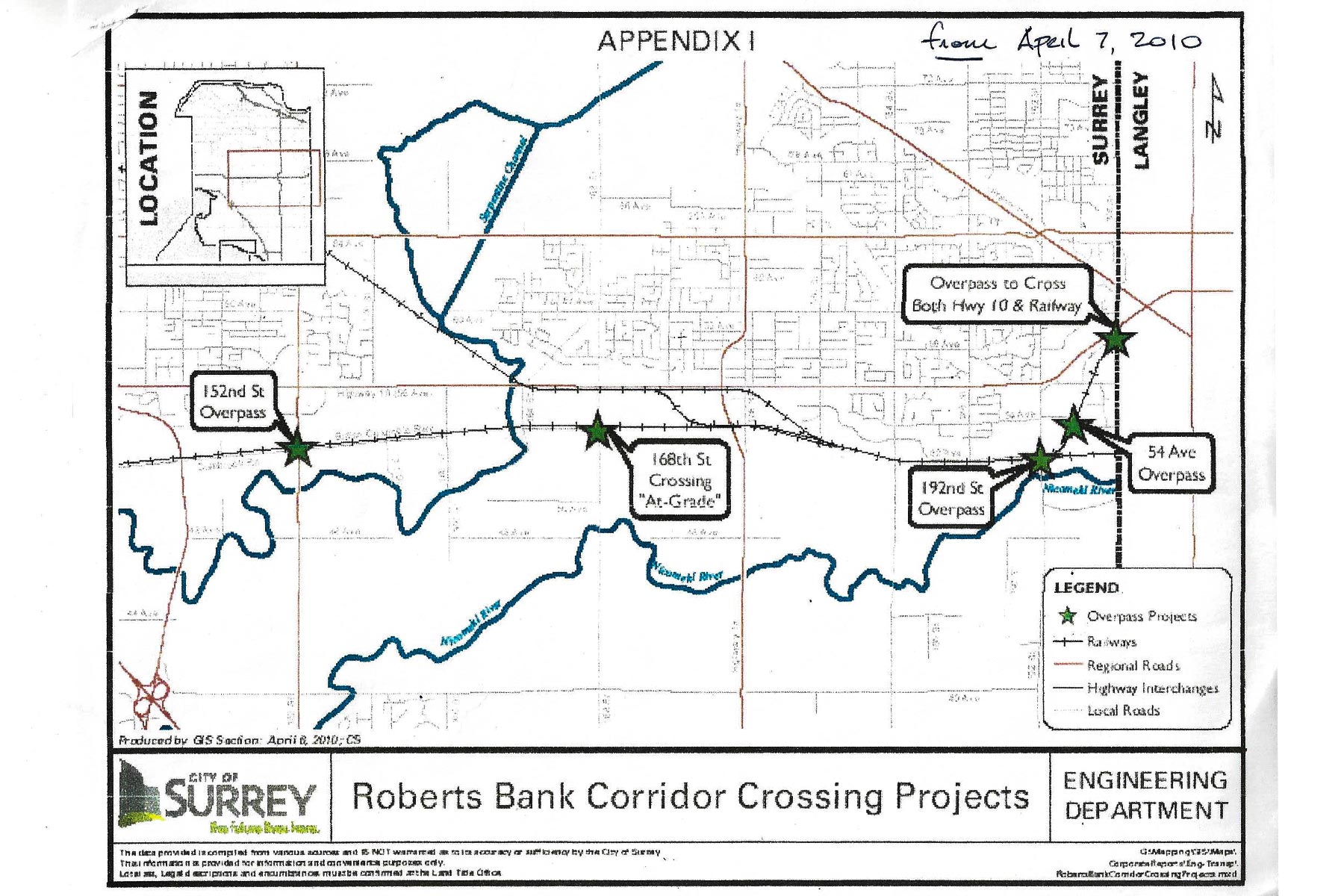 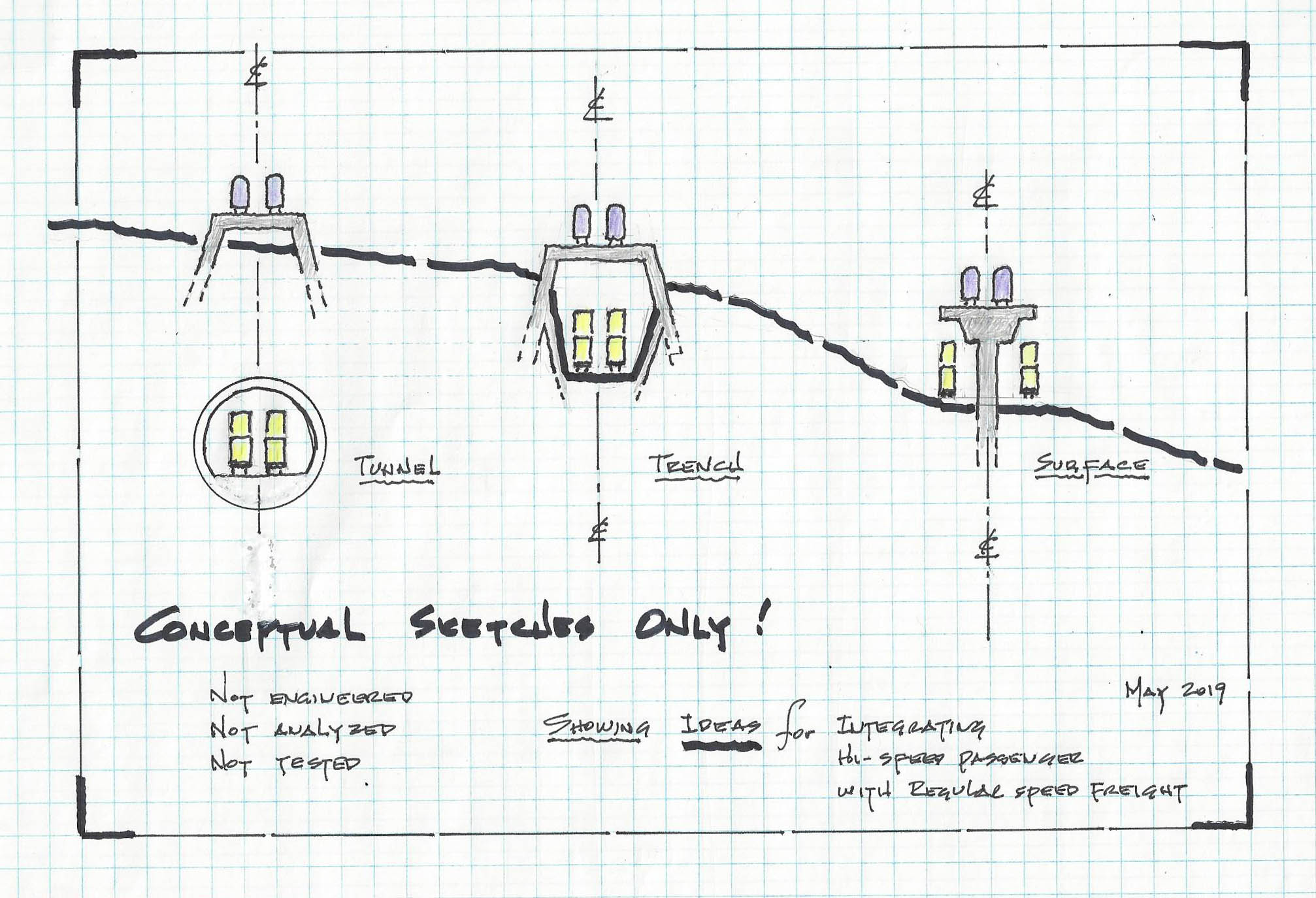 Canada’s Pacific Gateway moves people and goods easily between North America and the world. Marine ports, railways, roads and airports provide efficient, reliable market access. A formal ‘Pacific Gateway’ initiative, spearheaded by the Federal Government, was substantially completed by 2016; see Gateway link here. Many initiatives and projects were completed, almost unknown for their origins. One closer to home has been the ‘Roberts Bank Corridor Crossing Projects’, which were the five road overpasses of the east-west rail line running north of the Nicomekl River. Of particular significance is the dollar scale of the total project and the co-sharing of capital funding by 11 entities. Please refer to both the map layout and the dollar funding allocation as of 2010, to the left of this script; see Co-Sharing link here

A new ‘Greater Vancouver Gateway Vancouver’ initiative was approved in June 2018 and has received federal funding commitments of more than $200M; we have met with Port Vancouver in November 2019 and are in the process of coordinating a second meeting with them in January or February of 2020; we are wishing to merge our aspirations for starting the alignment [feasibility] study and getting the cooperation of their capital management folks; see Gateway 2030 link here.

We envision Capital Cost funding for our Rail Relocation initiative from multi-party sharing, plus, by legislation, from both the Federal Government and BNSF. See Ref #4 as well as card #18 for more detail.

Economic growth [GDP] and trade are intensely linked. Much discussion as well as references to important studies covering west coast ports, is contained in Ref #4. An important look into the future was launched in mid-2014 by the Government of Canada, and concluded in late 2015, when the final report was submitted to the Minister of Transport by the Chair of the Review, the Honourable David Emerson, P.C., O.B.C. The report looked forward 20 to 30 years to identify priorities and potential actions in transportation that will support Canada’s long-term economic well-being. A recurring theme in the report is the inseparable relationship between Canada’s international trade performance and the quality of the transportation and logistics systems. See CTA Review

Hi-Speed Passenger Rail is a hot political topic now, and follows an initial 2017 study. BC, Washington, and Oregon departments of Transportation have cooperated, along with Microsoft, in funding a larger, joint feasibility study into a more detailed Business case to turn a welcome dream into a possible reality. Craig as advocate administrator for our BNSF Rail Relocation attended the recent October 3rd ‘Cascadia Innovation Corridor’ conference in Seattle; see here. The very lengthy and detailed Business Case for this initiative is now done, see it here. 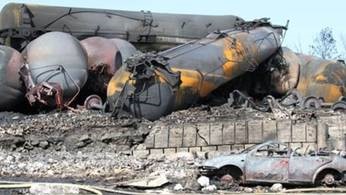 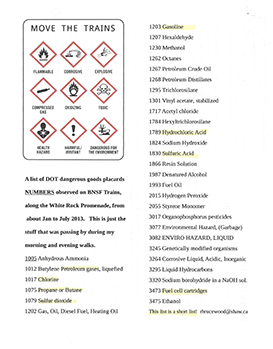 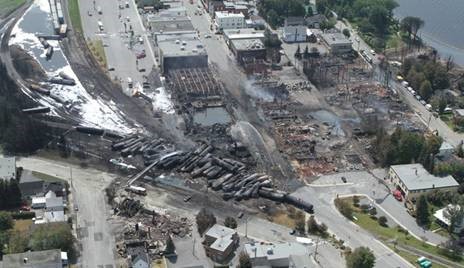 Major human life losses are on the horizon. The majority of the advocacy work done to date, including that of documented UDE’s and slides, has managed to evade discussion surrounding the loss of human life as a direct outcome of rail derailments. The reality of serious impacts and danger to human safety and lives requires attention by our Provincial and Federal governments as we observe changes in rail travel on our shoreline route, such as longer and heavier trains, increased frequency, the effects climate change is imposing on railroads, as well as human error. The rail disaster that claimed 50 human lives in Lac-Megantic in July 2013 is still being felt today. It is estimated that it will take decades to overcome the political, legal, and human devastation that was imposed on this community; see Lac-Meg link here

Oil spillage and explosions remain a distinct possibility as long as Bakken USA crude oil continues to come north to Roberts Banks for ocean shipment; Lac Megantic is our most vivid Canadian example; the following video also shows in many examples what can happen when crude oil explodes after a disaster; this is a 2014 video by the website ‘Rail and Reason’ we acknowledge that some improvements in rail cars and safety procedures have since occurred in Canada and the US; more remains to be done; nothing is certain; see Explosions link here

A list of DOT dangerous goods placards numbers observed on BNSF trains, along the White Rock promenade, from about January to July 2013, was compiled by an interested safety advocate; we will attempt to have this updated either manually of electronically and will report as time permits. See chart at left.

Chlorine spills are another serious outcome of train derailment and threaten to devastate human life in the affected areas. These dangers to humans are particularly prominent concerns to those living in and using the area of Crescent Beach.  Since chlorine is heavier than air, it slowly seeks lower ground as it spreads out to larger areas. If a spill occurs in Crescent Beach it is believed that a natural reaction by humans will be to flee into the water to seek refuge. This does not prove effective as it does not eliminate humans from the grave danger of toxic fume inhalation of chlorine gases that would be present. Consider the Mississauga chlorine spill of November 1979 where major evacuations and actions by many heroes, prevented a major disaster; see Mississauga link here ; ; lastly, we regret we were unable to obtain action from that mentioned Colorado US firm whom specializes in visual modelling air spills and contamination over undulating ground, as they simply are swamped with work; they suggested contacting UBC locally whereupon we will hope to get produced a visual model of what a chlorine spill might look like in the Crescent Beach area, and how it might unfold; we will report as soon as possible.

Ammonia spills are an always present danger as long as railroads continue to carry this product. The best ammonia spill example is the 2002 derailment in Minot ND, which killed one, injured 95, and derailed 112 cars with the cause being joint fatigue and improper maintenance; see Minot derail link here … 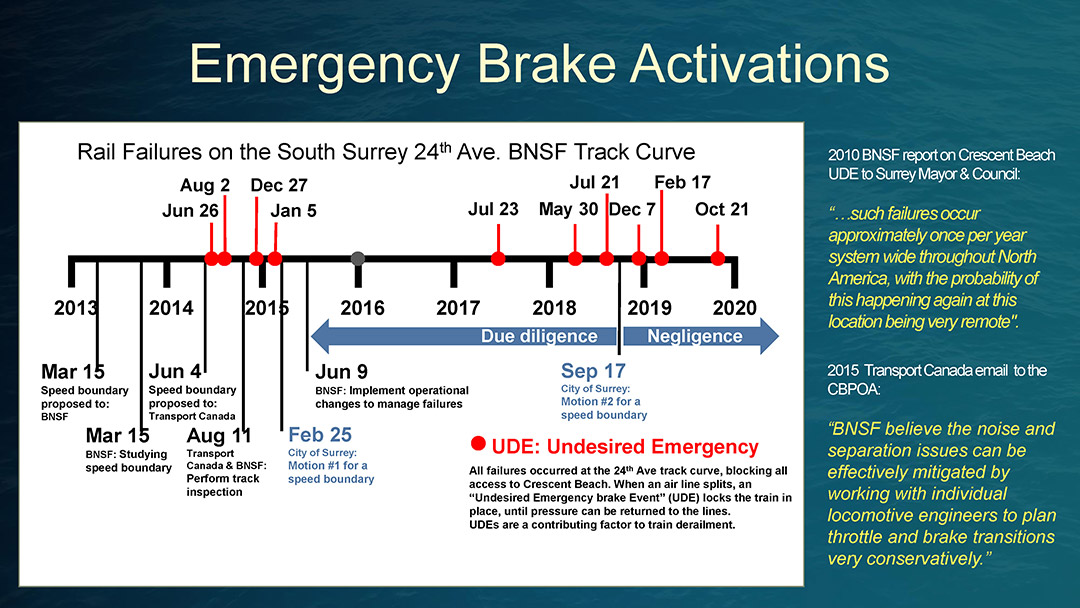 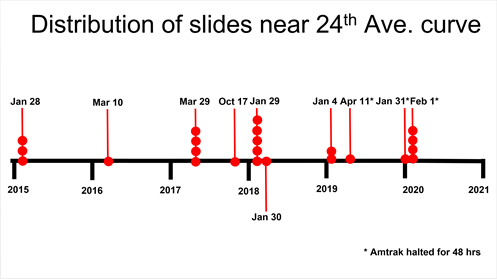 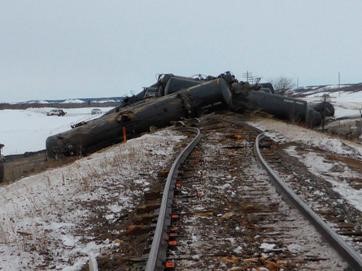 An ‘Undesired Emergency’ [UDE] or ‘Emergency Application’ occurs when a train comes to an abrupt stop caused by the activation of the emergency brake. In some cases, this application is engaged by the locomotive engineer to prevent collisions or accidents. In other cases, the emergency application originates with a train occurrence, such as a broken pipeline, itself caused by events such as extreme cold, slack action from poor car positioning or undulating territory. The UDE can be without incident, or it can be disastrous. For elaboration, including two videos please see the May 2019 discussion paper by Mary-Jane Bennett, transportation consultant at UDE link.

Soil Slides of the steep hillside on the west side of the Peninsula facing the ocean, are becoming more frequent. We have yet to secure an official report on all contributing factors; one can speculate that the effects of climate change, occurring slowly, are an important part of these occurrences; we advocates have documented 17 such slides along this 24th Ave curve during the years 2015 to 2019; whether this is cause to become alarmed may well depend on whether a future slide causes a rail derailment; see graphic to left to fully illustrate this important point.

Rising ocean levels are an inevitable outcome of climate change. This is an increasing concern for low-lying ocean cities and municipalities around the world. The Province of BC has mandated that all municipalities bordering the ocean create strategic plans into the future as to how to physically handle such concerns and occurrences. In response the City of Surrey has initiated over the past two years, their ‘Coastal Flood Adaption Strategy’ [CFAS] The focus has been on the Mud Bay area, Crescent Beach, and Semiahmoo First Nation. It has been reported, but not observed, that parts of the BNSF rail line north of Crescent Beach are now experiencing water lapping over the rails during high winds and storms.

Mechanical issues remain an ongoing area of concern for railroads including BNSF. One can discuss and comment about the levels of safety oversight by BNSF and the Transportation Safety Board [TSB]; rail safety hearings were conducted in Ottawa in 2016 by our federal MP at the time, Diane Watts; see TSB Data link here;

Recent examples of rail derailments close to home are the following:

And to drive home the fact that derailments do in fact frequently happen in Canada, here is a July 16th New York Times story (Yes, from USA)… View Story. … and then a blast from the past … “The explosion launched a rail car into the air; it landed a kilometer away.”; on the 40th anniversary of the Mississauga Miracle, the G & M recently talked to those who fought, fled and reported on the fiery derailment… the miracle was that no one was killed… read the story and marvel at this unbelievable story… See here. 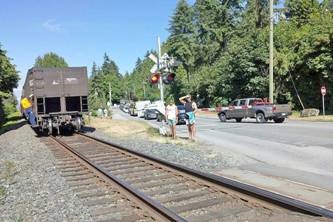 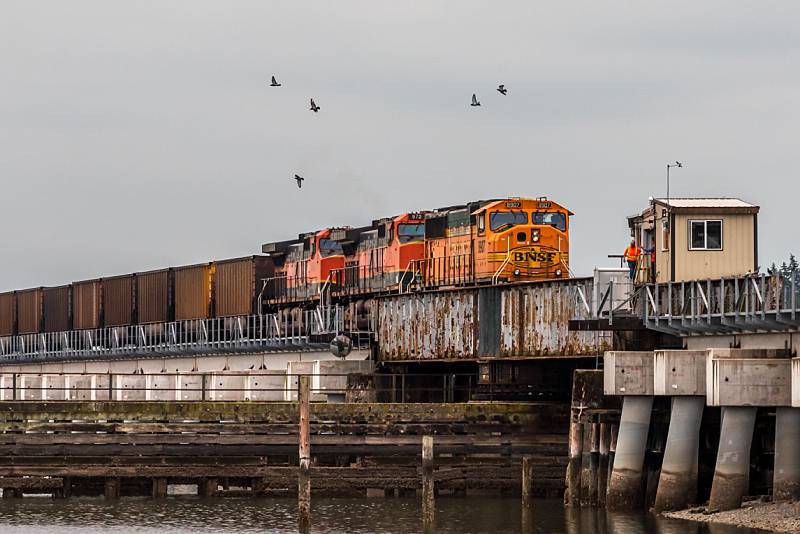 Safety concerns on this particular BNSF rail line have been building and magnifying over the years and are now reaching critical levels. These include: multiple undesired emergencies [UDE’s], multiple soil slope slides, rising ocean overlap, mechanical issues and disrupted emergency access. Liability may well fall on the Government if one of the above disasters occurs prior to political action being taken. It is imperative to note the potential risk and impact to the human lives in the surrounding area. Please reference cards #4,#5 and #6 for additional information regarding these concerns and impacts to human life.

Economic concerns are centralized around  the following: disruption to the essential BC-WA route and the possibility of closure for the Abbotsford-Sumas route. Economic opportunities include completion of the ‘Gateway initiative’, capital funding from several sources including BNSF, as well as the merging of the rail relocation alignment [feasibility]​ study with the present study for a Hi-Speed passenger route from Portland to Vancouver.

Numerous citizens over the years of 2013 to 2020 have acted as dedicated advocates to raise awareness of emerging issues regarding the present BNSF rail route. These efforts are characterized by ‘top-down’ interactions with politicians of municipal, provincial, and federal jurisdictions. A ‘bottom-up’ public forum called for by Mayor Wayne Baldwin of White Rock was held in October of 2018. This public forum not only generated a high yield of citizen attendance on short notice, but also welcomed a large amount of positive energy in support of rail relocation. The combination of media coverage and the information presented through this website support and highlight the efforts to date through both top-down and bottom-up methods.

Our next steps moving forward are to complete the feasibility Study as well as the application to the Canadian Transportation Agency [CTA] under the ‘Rail Relocation and Crossing Act’ (current to October 2018); see RR & X-ing link here. This act was designed to provide municipal and provincial governments the authority to initiate the relocation of rail lines and reroute rail traffic in urban areas. The City of Surrey is prepared to implement this study and application once final funding for the alignment [feasibility] study has been secured. For additional information on these important issues please reference cards #11, #12, and #13. 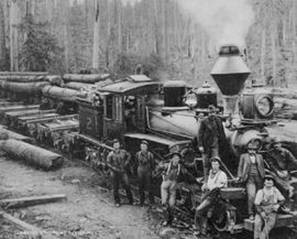 WR – SS Railroad at turn of Century = BC Museum

2030 and beyond suggests increasing frequency + length with toxicity unknown. With the proposed closure of the crossing at Sumas-Abbotsford, this route is fast becoming the major economic rail corridor between BC and WA. Safety disasters and/or economic disruptions will have major consequences in lives lost and economic losses. 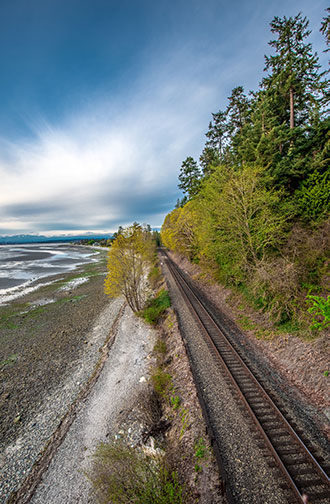 Provide a depository for the actions and information from 2013 to 2020, for the use of all stakeholders

Create a medium to complete funding of $900,000 for the alignment [feasibility] study

Thank you! You will receive an email link to confirm your email address and subscription.